I found some shimmery blue tile at Lowe’s and thought it would be perfect to make a mermaid on the wall. This started off great. I also had some metallic bars, that to me looked like gold bars, and some penny tiles that looked like doubloons. Here was the original concept.

Because it was complex, I did a chalk outline on the wall first first.

Then I added in the tail. So far so good.

Even the ungrouted mermaid looked pretty good, I thought.

But thenI had a problem. The lavender tile was really hard to see in the surrounding blue sea. I made the unfortunate decision to paint the grout black. Lol, obviously this was a mistake. It looked like a black walrus with red hair. 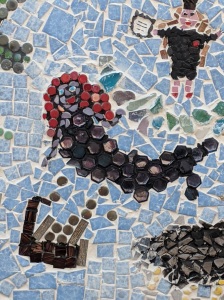 So I had to go back and grout over it, with white grout. Eventually I repainted the joints in the arms so they were visible. I changed the eye color to blue and in retrospect I should have left them black. I noticed too that the treasure chest looked like a cardboard box.

The final result is below. I rounded the treasure chest, added  more to the bottom, and did the best I could with the little mermaid.

I think it’s important to show how much you can mess things up in a project like this. When everything is seen together, you can get away with the small stuff.

Until next time, happy tiling!