Over seven years ago, when I was at the end of my tether, I started a blog under a pseudonym, Carly G. I wrote it only to vent, to let people learn from my bad choices.  I didn’t think I’d have enough material to keep it going, but as time and life went on, and took turns I didn’t expect, it became my favorite thing to write. I don’t think I’ve written any fiction in at least six months, but I’ve kept my Rebound Dogs blog active.  This author blog has been quiet except for occasional recipes but worry not. I’ve been writing. It’s not fiction but it comes from the heart and is meant to share and to inspire.

This week the book version of the first 98 blog posts was released. HERE is the link.  to Amazon where you can read it all in one book. You can of course always go directly to the site and read for free. The first entry in the book is from May so be sure to check out the new posts. Here’s the Rebound Dogs link.

Someday maybe I’ll get back to fiction, but for now

the happy stuff, the real stuff, the life experiences and observations I write about without a fictional spin are filling my soul. 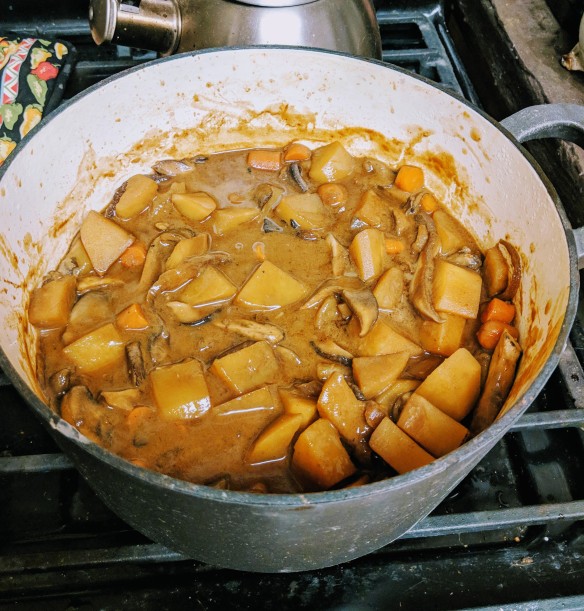 I became a vegatarian a year ago and have been trying a lot of different recipes. At first I lived on fake meat products, like fake fish sticks or fake chicken patties or veggie burgers. Those were delicious but after a while I got tired of those things. I went tbrough a seitan phase (see previous posts) but that bothered my stomach. Note, I still LOVE Quorn sliced turkey and the meat free bologna in my grocery store.

I’ve been in a rut eating frozen veggie cauliflower pizza too often. I love it but I should eat healthy and not just vegetarian. I stumbled across a variation of this recipe on Pinterest. In that one, the poster made seitan and floured it and sauteeed it. I didn’t want to do that. I also didn’t have some of the ingredients or didn’t like some, or wanted to save myself work. So it’s not the same recipe at all but it inspired me to make this one.

Here is my version which doesn’t have meat or fake meat, just spices, carrots, potatoes, mushrooms and a few other things. To me, it tastes just like the hearty New England beef stew I grew up with except each spoonful is missing the piece of beef. And I’m good with that.

Preheat oven to 350 degrees. I cooked mine in a Dutch oven. If you don’t have a pot you can  cook it on the stove but I’m not sure how long it would take. The oven was very easy.

In the pot on the stove add together:

Heat just enough to combine. Dump in all the vegetables listed above except mushrooms. Cover and place in the oven for an hour.

Meanwhile, put the mushrooms on the stove in a small pan and sautee on medium heat with a little veggie broth until tender. Add the can of soup and stir until combined then remove from heat.

When the pot of stew is done (check for tenderness and add more time if needed) pour in the mushroom and soup combo and stir. This will give the stew a thick gravy and adds a lot of flavor.

Enjoy! Let me know if you make it and have any suggestions.