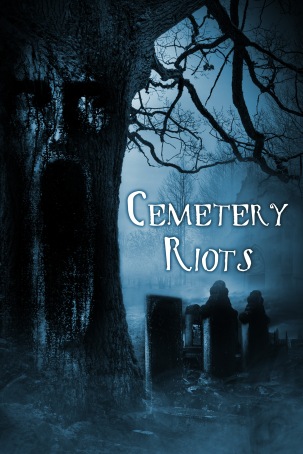 I have been lax in posting but have nonetheless been quite busy writing short stories, a new novel, and most recently teaming up to co-edit a fantastic anthology!

Coming in June, T.C. Bennett and I will be releasing Cemetery Riots.

To date, we have bought six stories listed in order of acceptance.

James S. Dorr with The Re-possessed put a new spin on a period piece about graverobbers and true zombies.

William F. Nolan with a wonderful ghostly war story called Among the Tigers.

Kelly Kurtzhals, a new writer, who crafted an eerie tale titled The Cellar about an apartment’s basement which keeps changing in size.

Tracy L. Carbone with Lunch at Mom’s.  I sent in a story to Mr. Bennett because I was excited about the list of contributors and hoped to be a part of it. He accepted my story, said he loved it. Yay! And then I asked if I could co-edit because this is going to be GREAT collection and I want to work with all the talented authors he’d invited. Normally I would not include one of my stories in a book I’m editing but since he took it before I joined came on board I can break my rule.

John Palisano sent us Eternal Valley, a period piece about a man who moves his family to the country to heal his son. But the boy’s good health is short lived when a water monster possesses him, and a mysterious woman is the only one who can save his soul. It’s a moving story about a father who will do anything for his child.

Hal Bodner wrote a beautiful tale entitled Children’s Hour. A man who lost his son in a tragedy spends most of his adult life tending to the children’s section of the a large cemetery. As the years pass, his belief that death is final comes into question as the restless spirits of rambunctious children teach him a lesson that will alter him forever.

Eric J. Guignard penned a lovely, literary story called Certain Sights of an Afflicted Woman. It’s a period piece about a woman afflicted with a disease that saves her life, but sadly not those around her. It’s about family and survival and accepting fate. It’s flawless and beautiful, as is most of his work, and the kind of story that makes me proud to be an editor.

Ray Garton just sent over The Waiting Dead. It’s heartbreaking, beautiful, and the kind of story we are so excited to have in our collection. A hopelessly discouraged overweight girl on the verge of suicide visits a relative’s grave, only to be befriended by a dead young man who wanders the graveyard. LOVE this story and I’m sure you will too.

Chet Williamson, sent  a story called That Still, Bleeding Object of Desire. He warned us, before having us read it, that it might be too weird. Hah! We didn’t think it was weird at all, only disturbing, dark, and well written, which are our favorite criteria. I can’t say much about the story without giving it away. Briefly though, a seemingly horrible man does reprehensible things and it seems we are entering a murder mystery, and a gripping one at that. And I suppose in the end, that’s exactly what it was, but Chet provided some brilliant twists that kept us reading, and surprised us in the end, leaving us gratified, and excited to publish it.

Michael Sebastian’s HWA mentor Eric J. Guignard asked if Michael could send a story even though we had all our slots spoken for. We said yes because we’re nice and Eric wouldn’t steer us wrong. The story, Clown on Black Velvet, ended up being a well written story about a young comedian who dreams of fame, and then gets it in spite of himself.

Michael D. Nye, a full time actor with an impressive background in writing as well,  met me at the Writer’s Coffeehouse in Burbank. After the meeting he asked if I’d be willing to give him feedback  on a story he’d written. I LOVED to story as did my co-editor T. C. Though Michael didn’t know about our anthology I asked if he would PLEASE sell it to us. Thankfully he said yes. The Itch is about an unsuspecting man who, through mysterious and unwanted circumstances, gradually develops a compulsion to kill, and kill, and kill.

Updated: Not all the authors are listed here. Please see the more recent posts about the book. We’re still in track to publish this in late June 2016.

Congratulations to all the authors so far!