One of life’s great surprises is when you open the pages of a new book, in this case a collection of horror, and are immediately drawn in and frightened. I had that experience with Darkness Ad Infinitum, Villipede Publications’ first horror and dark speculative fiction anthology.

All told there were nineteen entries comprised of stories and poems that were reminiscent of episodes of Night Gallery, or the classic horror films of the 1970s. The stories were subtle yet horrifying, and the sudden and building tension made the well-written tales a quick read.

Most of the contributions were brilliant, bringing me down a path of panic and terror right alongside the characters. I began to list my favorites, but upon typing realized that I was listing almost the entire table of contents. Since I must pick only a few pieces, I chose the ones that will stay with and haunt me forever. These are listed below.

The Westhoff Version by Patrick O’Neill. This story was subtle, and throughout much of the telling only teased and hinted at what was going on. Once the writer revealed the true terror, all went from merely chilling to horrifying. I found myself praying the characters would make it out alive.

The Undertaker’s Melancholy by Sydney Leigh is a poem about madness. Not run-of-the mill schizophrenia, but a character trapped in a demented hell of a mind. The ebbs and flows in the prose are what made it most disturbing. Waves of calm and beautiful imagery rapidly turn, transforming into monstrous vignettes. The author’s mixed use of long and short words are perfectly ordered to provide the semblance of peace, which then strike you down and yank you back to insanity.

Brannigan’s Window by John Mc Caffrey was also well done. Though it’s set in modern times, it had a wonderfully gothic horror feel to it.

Smudge by Jonathan Templar was another good one in the collection. This was a story whose main character relays his growing fear so well that the reader is drawn into his mounting panic over the mysterious smudge in the corner of his ceiling.

Finally, the short poem The Burning Man by Tony Flynn scared the heck out of me. Well done!

I would be remiss if I did not mention how much the artwork, by too many contributors to mention here, elevated the fearful feeling of this collection. This is a book to buy in print and to hold onto for stormy nights, to read by candlelight when the power is out. It’s a keeper. 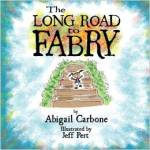 Congratulations to my daughter Abigail Carbone. Her senior project book, The Long Road to Fabry, about her experience with Fabry Disease, illustrated by Jeff Pert (who sadly departed us earlier in 2014), will soon be available in Japanese!

We were contacted by a representative of  Japan’s Genyme Corporation division who came to the Fabry conference in San Diego in February. She received a copy of Abby’s book and brought it back with her to Japan and showed it to the coordinator of a Fabry organization out there. Because of our cross country move, moving Abby into college, and settling myself and the pets into the new home in California, the project was delayed.

We are now working with Genzyme to get the Japanese translation underway. We are very excited that her story will be told to a whole new country of people. As always, all proceeds will go to Fabry charities.

For a copy of the book in English, please click on either of the pictures.